Dakhla is a small city in southern Morocco on the Atlantic Ocean with white sand dunes. If you are interested in water holidays and you love sailing and boating activities Dakhla is the perfect choice for your holiday.
The Atlantic coast of Morocco is windy especially in Dakhla hence why Dakhla is recommended for wind sports (kite surfing/windsurfing).

It is best to reach Dakhla via the airport as the road is long and tiring. The first leg of the flight will generally be to Casablanca as most international carriers fly there. From there you will fly on to Dakhla which is served by RAM (Royal Air Maroc). The 3 kilometre long runway can accommodate a Boeing 737 or smaller aircraft.

There is no train station in the city.

CTM or Supratour offer buses to Dakhla and it is advisable to book tickets advance. The trip is long and takes between 19 to 20 hours.

Note : From Tan Tan there are many police controls points so take photocopies of your passport with you in case required.

Where to Stay in Dakhla

Dakhla was occupied by Spain from the late 19th century until 1975, when it returned under Moroccan control after the Green March.

Dakhla is well known for being a great spot for kitesurfing, windsurfing and surf casting With over 300 days of wind every year, this is THE place to be for kiters and windsurfers.

Dakhla offers plenty of no wind alternatives, Go and check out the beautiful white dunes of the Moroccan Sahara. The Sahara is the world's largest hot desert and one of the best places on earth for a view of the night sky.

Dakhla Peninsula is one of the most important wintering grounds for birds especially waders. You can see many other birds such as the Greater Flamingo, Pelican, great cormorant and lire. 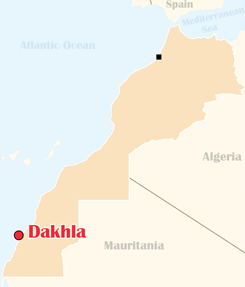