Tangier is located on the North African coast where the Mediterranean Sea meets the Atlantic Ocean. The city is located only 24 kilometers from the Spanish coast.

This is probably the best way to get to Tangier with the airport 'Tangier-Ibn Batouta Airport' located 12km from the city. The cost of the journey of the city is 150 Dhs and 100 Dhs for the return journey.

You can travel by ferry from Spain (Algeciras, Barcelona), France (Sète) or Italy (Naples, Genoa, Livourne), the cost depending on the distance and if you are traveling with your car or on foot.

You can get to Tangier by train, it takes 4 hours from Rabat and 5 hours from Casablanca or Fes.

If you arrive by car or motorcycle on the ferry remember that you can enter the country for 6 months in any one year (365 days). You must also have green card insurance and temporary import forms are available on the ferry.
From Rabat, Casablanca or Marrakesh : Tangier is accessible via A1 highway.
From Fes : Follow A2 to Route de Sidi Allal Bahraoui/R405 in Sidi Allal El Bahraoui. Exit from A2 -> Get on A1 in Gharb-Chrarda-Beni Hssen -> Merge onto A1.

Where to Stay in Tangier

The city of Tangier was founded in the 4th century BC by the Carthaginians who made a commercial town (Tingi). Due to the historical presence of many civilizations Tangier has a rich history.

Antaeus, son of Poseidon, would have chosen to give his wife's name, Tingis (“Tanjah” in Arabic), to a place on the Mediterranean coast. But it was most likely the Berbers who have created Tinga, the lagoon city. The Phoenicians installed a business counter from Lixus, around the 7th or the 6th century BC. After the fall and the destruction of Carthage, Tangier became Roman, and was even declared as the capital of Mauretania, Tingitane. Later, during the 8th century of our era, it served the Arab goals in Europe.

Considered by the latter to be a strategic post, Tangier was stormed by Berber troops, freshly converted to Islam, and became Arab for the first time. The city became Moroccan (through the Idrissides), then Spanish, though the Cordoba Omeyyades, then Moroccan again through the big dynasties. Taking advantage of its exceptional location on the strait, the Tingitane Peninsula observes closely, the big European embarkations on the sea, to trade and discover new horizons. Tangiers benefits from it directly, and the great explorers Ibn Batouta and Leo Africanus describe it as a zone of great riches and peace.

Starting in the 15th century, the great colonizing powers seize the city. It started with the Portuguese in 1471, and the Spanish. Then, the marriage between Catherine of Braganza and Charles II of England made it an English city in 1661. But the Moroccans rebel, and after heavy fighting, Moulay Ismail is the master of the city in 1684. During the period that follows, Tangier remains coveted and develops slowly, even if it becomes the place of residence of international consular representatives in Morocco. Victim of history's trials and tribulations, the city is bombarded in 1844 during the French-Moroccan conflict.

The medina is a bit chaotic and messy but it's worth a visit if you want to experience an authentic lifestyle.

This park is named after the Greek-American noble who became the unofficial head of Tangier's foreign community. The park is beautiful, clean and very safe during the day.

The cave of Hercules, located just 14kms west of Tangiers is a major tourist attraction. It is believed that Hercules slept there before attempting one of his twelve labours.

A good spot to take some photos, the view is nice and the place is surrounded by pine forests.

In 1821 Sultan Moulay Slimane gave this building as a gift to the U.S. As such, the Legation building became the first piece of property acquired abroad by the U.S. government

From the 'Lazy's Terrace' is a good place for a coffee or a mint tea while appreciating the view of Europe.

Built in 1913 by the Spanish this theater is accessible via the Avenue Pasteur and Rue du Prince Moulay Abdallah. The theater was once considered one of the most prestigious in North Africa.
However, the restoration of the theater has been delayed because of a dispute between Spain and Morocco. 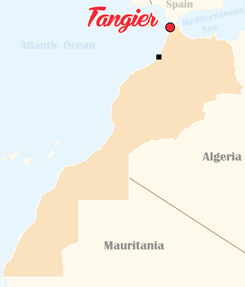