El-Jadida means the 'new' in Arabic. The city is located on the shore of the Atlantic Ocean just 104km south of Casablanca. The Portuguese fortified city is registered as a UNESCO World Heritage Site.
The town today is a fishing port known for its Herring.

There is no airport in the city but the airport of Casablanca 'Mohammed V International Airport' is 1 hour 20 minutes from the city.

You can travel to El-Jadida by train. It takes 1 hour 20 minutes from Casablanca and 5 hours from Marrakesh via Casablanca.
There are 5 departures everyday from Casablanca (the first one at 10:27AM and the last one at 21:25PM).

The city is accessible via highway which connects it with the cities of Casablanca, Rabat, Fes, Essaouira and Tangier.

Where to Stay in Mazagan

Riad La Villa And Spa
From 85$

In 1514 the Portuguese built a fortress named Mazagão to defend trade vessels from pirates. In 1542 they built a walled city around the fortress, capable of housing thousands of residents from Portugal.
In 1755, Mazagan, as with all Moroccan cities on the Atlantic coast, was damaged by the earthquake and the tsunami. In 1769 the city was taken over by Morocco under the rule of Mohammed III.

The cistern is a great place to take photos, the thin layer of water on the ground gives a beautiful reflecting effect of the 25 pillars.
The water stored here was meant for emergencies in case the water source from outside was blocked.

Manueline Church of the Assumption

The church was built following the Manueline style (Portuguese late Gothic). The building was recently restored after that the roof fell in.

Sidi Bouzid is a seaside resort located 5 km away from El Jadida, built on concrete, and is organized around one of the biggest beaches of the region. The architecture looks like the one of the seaside resorts located on the Mediterranean coast. Allotments and vacation houses run along the shoreline. Despite all that, the 2-km beach is beautiful. You will appreciate swimming there if the crowded sunshades and the decibels of the local DJ don’t scare you.
This beautiful sandy beach ideal for a short walk before going bed or after a good meal.

The lighthouse is worth a look. It was built in 1913 on the highest point of the city. (The tower height is 46 meters) The tower is 46 meters high (and) with an (its) average range (is) of 30 nautical miles. (You can see it beams every night over the sky of El-Jadida') Its beams can be seen over El-Jadaida sky every night.

The Kasbah Boulaouane was built around 1710 by Moulay Ismail. It overlooks the valley and the Oum-er-Rbia river but the Kasbah is today in ruins.

This small town is only 1 hour from El Jadida, You can go for long walks along the sandy beaches. You'll enjoy the tranquility of this beautiful lagoon and you can eat the delicious Oualidia oysters that are renowned in Morocco 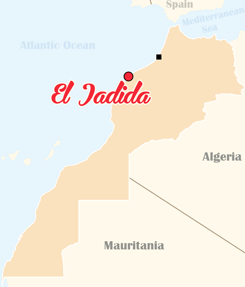