The following is a list of beautiful ancient cities that really are worth a visit.

Volubilis was a Roman city built on the ruins of an early Phoenician city. It's a UNESCO World Heritage Site and one of the best preseved ancient cities in Morocco.

The ancient city of Lixus was a major Atlantic port for the Phoenicians. The city emerges from a hill at the bend of the Loukkos River on the western coast of Morocco.

Sala colonia also called Chellah was a colony of different cultures: the Phoenicians, the Carthaginians and the Romans, it is a medieval fortified necropolis located near the capital of Morocco Rabat.

Ait Ben Haddou is located in the Ounila Valley, south of Télouet. It was an important crossing point for the caravans (group of people traveling together across a desert) from Marrakesh to Sahara. 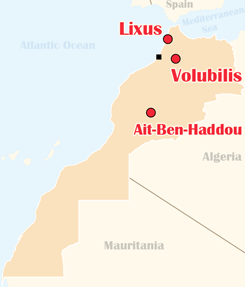