Essaouira is a tourist town thanks to a mild climate, beautiful beaches and historic monuments and sites. The medina was listed as a UNESCO World Heritage Site in 2001.
The city is also renowned for windsurfing and kitesurfing, with powerful winds that blow almost constantly in the bay.

Only 3 companies offer a direct international flight to Essaouira Airport : Easyjet from London, Transavia from Paris and Ryanair from Marseille (France). If you are already in Morocco Royal Air Maroc offer direct flight from Casablanca. The airport is located 18 km from the city center.

There is no train station.

If you are traveling from Marrakesh, buses leave on a regular basis between 4am and 7pm. Supratours buses go from the bus station right next to the train station. 'CTM' also have a coach service from Marrakesh's bus station just outside the city walls at Bab Doukkala.
From Essaouira you can travel by bus to Marrakesh, Agadir, Casablanca and El Jadida.

Where to Stay in Essaouira

In 1506, the Portuguese built a fortress there called 'Castelo Real de Mogador' but due to the resistance of the local population, the Portuguese left on the 4th December 1510, although despite being abandoned it remained protected by the Saadians during the seventeenth century.
In 1760, the sultan Mohammed III ordered the construction of the city and hired a French architect, Théodore Cornut. In 1775 the Sultan ordered the demolition of the Castello Real and the stones were later reused in the construction of the Port Sqala. Years later the city became one of Morocco's main commercial centers. Until the 1960s, Essaouira was generally known as Mogador, the most likely theory is that the name comes from the Berber name 'Mugadir' which means 'the one surrounded by ramparts'.

The medina of Essaouira has been a UNESCO World Heritage site since 2001. The town is well preserved and, for the most part has conserved its authenticity.
The medina is easy to navigate, all districts were founded between the eighteenth and nineteenth century, the oldest one remains the Kasbah, a fortified area where dignitaries lived. You can also find many small craft workshops in the medina.

It took several years for the French architect Théodore Cornut to build the Kasbah and the walls however when the Sultan Mohammed III found out that there had been damage to the walls caused by the waves, he fired him and hired a Genoese architect for the construction of the 'scala' on the western ramparts facing the sea.
The land fortifications are built in a Moroccan style, similar to the fortifications of Marrakesh, whilst the sea fortifications and the cannons were built in a European style.

Bab El Marsa, in Arabic meaning 'The Navy's Door' is a fortified gate built in the eighteenth century. It is located in the harbor. The gate was built only from cut stone with an inscription at the top "Praise God : This door was ordered by the glorious king, Sidi Mohammed ben Abdallah and was built by his servant Ahmed Laâlaj in the year 1184H / 1770.".

Bab Marrakesh was built in the eighteenth century, at the same time as the walls and the medina. It is through this door that the travellers took the road to Marrakesh and Agadir.

Bab Doukkala is the gate that takes travellers to Safi and it is one of the largest gates in the city, measuring 15.60 meters wide and 7 meters high.

Both gates are very similar they face each other and they are quite small at 2.40 meters wide.

This large gate was built shortly after the expansion of the Essaouira Kasbah in 1866. It measures 12.70 meters wide and 5 meters high.

Formerly the King's gate, this gate was built in 1764, 'magana' meaning 'clock' in Arabic. The gate is situated between the new Kasbah (jdida) and the old Kasbah (kdima).

It is the only gate leading directly to the sea from the medina. The gate is sealed now but it is located in the neighborhood of Beni Antar.

The port of Essaouira was the main port for international trade in Morocco between the late eighteenth century and nineteenth century but its decline began when ports in Casablanca, Tangier and Agadir opened due to them being able to take larger boats.
The port is the third biggest sardine port in the country and became exclusively a fishing port in 1982.
You can buy your fish from the harbor and take them to the nearby restaurants to cook them for you.

This is a nice beach, clean and secure. You can of course just relax there or try some activities such as surfing, horse riding or kite surfing.

This gallery was the first art gallery in the city. It was opened in 1988 by the Dane, Mr Frédéric Damgaard. The gallery is situated in Avenue Oqba Ibn Nafiaa and you will find some fantastic pieces of local artists.

One of the other major art galleries in the city, you can find paintings and sculptures from both Morocco and the rest of Africa. The gallery is situated near the Place Moulay Hassan, at the entrance of the medina.

The festival showcases the great Mâalemines (Masters) Gnaouas playing the mystical and sacred music of the Gnawa.
The Gnawa are the descendants of the deported slave populations from Sub-Saharan Africa.
Hundreds of thousands of visitors from all over the world enjoy the festivities that take place throughout the city, mainly at the two large doors of the medina (Place Moulay el Hassan, and Bab Marrakesh), where the two largest stages are set. Many of the performances are free to watch.

Essaouira is renowned for windsurfing and kitesurfing, thanks to powerful winds that blow almost constantly in the bay. Lessons and rental of kite and surf equipment can be arranged on the beach 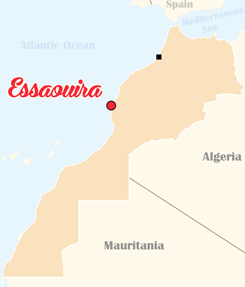