Menu
Home › Information › Where is Morocco?

You probably always assumed Morocco is an Arab country but do you know where Morocco is? Morocco is a country situated in North Africa, just south of Europe. In fact Spain is only 8.6 miles (14 Km) away from the Moroccan border. Morocco shares land borders with three countries : Spain, Algeria and Mauritania.

The official name of Morocco in Arabic is 'Al Mamlaka al-Maghrebiya' meaning the Kingdom of Morocco. In Arabic Morocco is called 'Al Maghrib' meaning 'Land of Sunset', the people of Morocco are referred to as Moroccan.
The current leader of Morocco is his Majesty the King, Mohammed VI who became monarch in 1999 after the death of his father the King Hassan II. Therefore there is no president of the state in Morocco, the head of the government is the President of the Government.


Rabat, the capital of Morocco

Morocco is in an advantageous location, North Africa, just miles away from Europe and have both Atlantic and Mediterranean coastline.
With mountains, desert and wide plains Morocco offers a varied landscape:

The Strait of Gibraltar

Morocco and Spain are separated by the Strait of Gibraltar, this naturally formed channel separates the African and European continent but also the Mediterranean Sea from the Atlantic Ocean.
A tunnel between both countries would make possible to set up a means of transport faster than the boat and less expensive than the airplane. Various project was proposed to connect Europe and Africa, a tunnel have been proposed in 1930 but it wasn't possible due to the hard rock and the limited resources available at the time.
In 2003, both countries were studying the possibility of a rail tunnel measuring 40 kilometres long, the cost of the project was estimated at 5 Billion euros. It was concluded that the project could be completed by 2025, subject to technical feasibility. 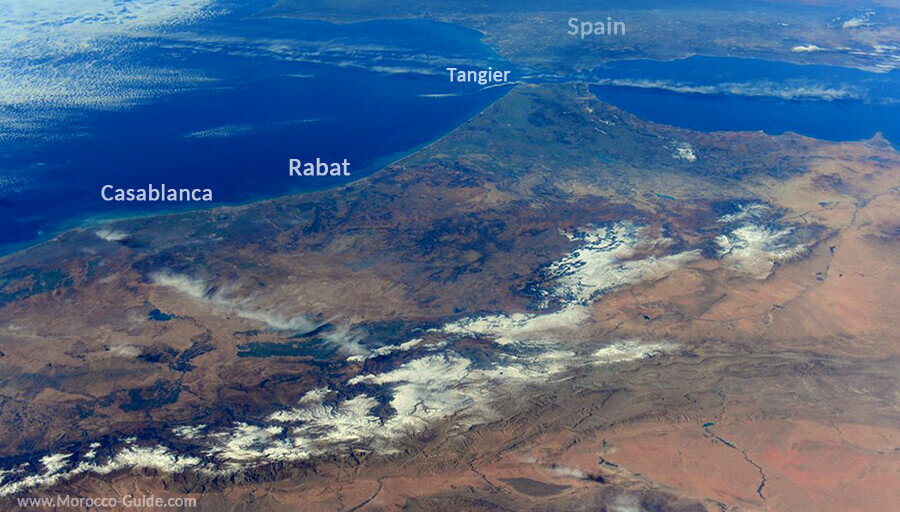 This image was taken from the International Space Station, you can see Spain in the north, the strait of Gibraltar that connects the Atlantic Ocean to the Mediterranean Sea and the north of Morocco.
You can easily spot the snow above the Atlas mountains (Middle Atlas and High Atlas range) serving as a natural barrier to the Sahara desert.

Morocco has a Mediterranean climate, summer is usually hot and dry, winters are cold and wet, with rain beginning in October : More details about Climate in Morocco.

The French imposed a protectorate over Morocco in 1912, it tooks 44 years to the country to take its independence back from France and Spain in 1956, after the return of the exile of the Sultan of Morocco Mohammed V. His Son, Hassan II, became king in 1961. One of the most important events to take place during his reign was 'The Green March' when 350,000 unarmed Moroccans volunteers advanced several miles into the Sahara to claim the return of Saharan territory from Spain and reinstore it under Moroccan sovereignty.

After the 'Green March' Spain agreed to cede the possession of the colony to Morocco. A conflict with Polisario Front backed by neighboring Algeria ensued, After several diplomatic efforts a ceasefire was agreed in 1991. Since then Morocco has controlled the majority of the Sahara territory.

Note: In 1777 under the reign of Sultan Mohammed III, Morocco became the first nation in the world to recognize the United States independence.

The red color symbolizes the Alaouite dynasty, the green five-pointed star was added via the Dahir of the 17 November 1915 by the Sultan Moulay Youssef, he considered it as the Seal of Solomon, the green color is used as a symbol of Islam.

This is the list of ancient Moroccan dynasty and their Flags :

The Idrissid dynasty (780-974) founded the first Moroccan state under the rule of Idriss I, they used a white flag.

The Almohad berber (1121-1269) ruled north Africa and Andalusia (Al-Andalus) their flag was a red flag with a 64-square chessboard placed in the middle.

The current king of the Kingdom is Mohammed VI. The young king made several decisions to reform and 'liberalise' the economy of his nation, and the country is a constitutional monarchy with an elected parliament.

A constitutional referendum was held in 2011: the new constitution places an important focus on human rights and was approved by a large majority. Nevertheless, there is still progress to be made, in particular with stopping corruption.

The official languages are Arabic and Berber. Arabic is the main language however most Moroccans speak an Arabic dialect called 'Darija'.
French is widely used in governmental institutions and large companies. Over 10 million Moroccans are French-speakers (a third of the population).
Spanish is spoken mainly in North Morocco with about 5 million Moroccans, English is the third most spoken foreign language with 2 million speakers, most of them graduates.

Islam is Morocco's official religion. 98.7% of Moroccan are Muslim, 1.1% Christian and 0.2% Jewish. Moroccan constitution grants the freedom to worship and congregation with Morocco being considered one of the most tolerant Arab countries.

Lear more about the History of Religions in Morocco

Morocco's economy is one of the most robust economies in Africa, the currency of Morocco is Moroccan Dirham (MAD or DHS).
The main sectors of Moroccan Economy are :

Morocco doesn't have Oil or Gas and the high cost of importing is a major problem for the country. However Morocco's goal is to reduce oil dependence by increasing the percentage of renewable electricity.
In 2016, the 'Noor Power Station' opened in Ouarzazate. It is the world's largest solar plant and is able to provide electricity for more than 1 million people. The country's goal is to generate 42% of its energy from renewables by 2020.

This e-book will be permanently updated, after each update you will receive for free the latest version.