Tetouan is city in northern Morocco near to Tangier, M'diq, Martil and Chefchaouen.

'Sania Ramel Airport' is an airport serving Tetouan. The airport is small but there are flights from Amsterdam (Corendon Airlines), from Liege in Belgium (JetairFly) and from Al Hoiceima or Casablanca with Royal Air Maroc. There are more choices available from Tangier airport 'Tangier-Ibn Batouta Airport'.

There is no train station in Tetouan but you take the to Tangier by train and from there by bus.

The bus station is located in the city center.

From Rabat, Casablanca or Marrakesh : Follow A1 to N1 in Tanger-Tetouan. Exit from A1 and take R417 and N2 to Tetouan.
From Fes : Follow A2 to Route de Sidi Allal Bahraoui/R405 in Sidi Allal El Bahraoui. Exit from A2 -> Get on A1 in Gharb-Chrarda-Beni Hssen -> Merge onto A1

Where to Stay in Tetouan

The city was founded in the third century B.C. During a revolt, the Roman army destroyed the settlement and the city was once again destroyed in 1437 by the Portuguese, after they had occupied Ceuta in 1415. Tetouan was rebuilt in 1483 by Andalusian refugees expelled after the Spanish Reconquista.
Abu Hassan Ali Al-Mandri an Andalou, commanding officer from Granada, was the founder and the architect of Tetouan.
After his death, his wife Sayyida al-Hurra became the governor of Tetouan. She wanted revenge after the loss of the kingdom of Granada in 1492 and joined an alliance with Barbarossa of Algiers. She married the Wattasside Sultan of Fez Abu al-Abbas Ahmad ibn Muhammad and he officially recognized her authority over the entire West area of the Rif.

This medina is one of the smallest in Morocco but it's the most intact. The architecture reveals a clear Andalusian influence and the medina is listed as UNESCO World Heritage.
The Medina is surrounded by 5 km of walls built in the fifteenth century. The city has 7 gates: in the North 'Bab Mqabare' and 'Bab Ejyafe', in the East 'Bab El Okla' and 'Bab Saaida', in the West 'Bab Nouader', and 2 gates in the South 'Bab Toute' and 'Bab Remouz'.
The old districts of the city are Trankat, Rbat Aala, Bled, Laayoune, Essania, Rbat Asfal and, as with all main cities in Morocco, the 'Mellah' which is the Jewish district.

The museum is located downtown at the intersection between the Medina and the new part of the city. It was built in 1939. The majority of objects exhibited come from ancient and modern excavations in northern Morocco.
The archaeological material on show are diverse pottery, amphorae (type of container), mosaics, inscriptions, steles (stone monuments), architectural elements, ancient coins, prehistoric stone tools and bone, faunal remains for example.
In the museum you will find a lovely Andalusian garden, vestibule, three permanent exhibition rooms, a screening room, a small restoration workshop, a reserve and administrative offices. 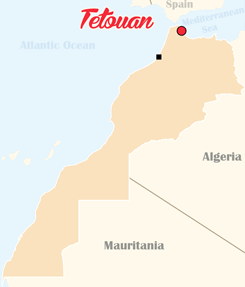