Fes - or Fez - was founded in the ninth century (789) under the reign of Moulay Idriss Ist. This great city is home to the world's oldest university, the Qarawiyyin university. The city peaked in the thirteenth and fourteenth centuries, under the Marinids, when it replaced Marrakesh as the capital of the kingdom.

International Fes Saïss airport is located 14 kilometers south of downtown. This is one of the most utilized airports in Morocco. Once you leave the airport, take a taxi (white) or a shuttle bus that connects the city center to the airport. The bus (line 16) cost only 4 Dirhams (leaves every hour). You can take a taxi but it cost more (150 Dirhams : (17$).

There is a regular train service and prices are cheap.

There are buses to all destinations with very reasonable prices. We recommand 'CTM' or 'Supratours'. The CTM Bus station is in place Allal el-Fassi.

All major cities in Morocco are accessible via the highway from Fes which is connected via the A2 highway to Meknes, Rabat, Casablanca and Marrakesh.

Where to Stay in Fes

The city 'Medina Fez' was founded by Sharif Alid Idris I in 789 where the current Andalusian district is located. In 808, the Regent Rashid Ben Morshid founded 'al-Aliya' on the other edge of the river. Al Aliya developed quickly and became a real city with a mosque, palace and kissariya (market).

From 817-818 nearly 800 Andalusian families, expelled by the Umayyad from Cordoues suburbs (currently in Spain), settled in the city, followed shortly by 200 families who were banished from Kairouan (currently in Tunisia). They settled on the al-Aliya bank.
The Quaraouiyine university was founded in 859 by Fatima al-Fihriya, the daughter of a wealthy merchant from Kairouan. The university became one of the most important spiritual and cultural centers of the time and played a part in the intellectual golden age of Islamic civilization.

The Medina is one of the best preserved historical towns in the Arab-Muslim world. You can walk around the city through the gates of Bab El Guissa in the north east, Bab Ftouh, east on the road of Taza which leads besides the thermal baths of Sidi Harazem, Bab Jdid, which is the nearest gateway to access the souks and Bab Boujloud to the west.

Fes el-Jadid and Fez el-Bali form the Fez medina, a UNESCO World Heritage Site.
Fes el-Jadid: built in the thirteenth century by the Merinides is an administrative area
Fez el-Bali: the oldest part, built by Idrissids.

Visit the oldest Library in the world. After three years of restoration the building is now open for visitors. It is the emblem of the city and its architecture is one of the best representatives of the Arab-Andalusian style.

Created in the eighteenth century by Sultan Moulay Abdallah, Jnan Sbil is the oldest public garden in the city. It is renowned for its variety of plant species and water supply infrastructure.

Bou Inania Madrasa is a madrasa (educational institution) built in Fez, retaubed between 1350 and 1355 for Sultan Abu 'Inan Faris. The facade of the madrasa has a very complex model of a water clock, a unique system that allowed to precisely knows the prayer times.

This is where men work tanning and dyeing leather.
They begin by cleaning the skin in pools of lime and ammonia fumes then color them and finally dry the cow goat /sheep hides on roofs.

Madrasa Attarine is a former Koranic school in Fez. It was built between 1323 and 1325 by the Marinid sultan Abu Said Othman. It takes its name from the nearby perfumes and spice souk.
Ticket price : 20 Dhs (2$)

Built in the eighteenth century as a trading point for these precious items, this monument over three floors, has recently been beautifully restored.

This museum was a palace in the 19th century, but now you can find a lot of traditional Moroccan arts and crafts as well as a superb ceramic collection dating from the 14th century. 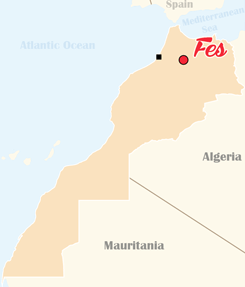