Rabat is the capital of Morocco and second largest city in the country, after Casablanca. It is located on the Atlantic Ocean on the south side of The Bou Regreg river. On the opposite north bank of the river lies the city of Salé (Sala). Rabat is one of the fourth imperial cities of Morocco and many parts of the city are listed as UNESCO World Heritage Sites.

The Rabat International Airport is 9 kms away from the city center in the nearby town of Salé.
There is a choice of transport links from the airport to the Rabat centre available :

There are two train stations in the capital, Agdal train station in the Agdal district and 3 km to the east is Rabat-Ville train station near the Moroccan parlement.
Major cities in Morocco are well connected by train. Travelling by train in Morocco is quite affordable. Travelling time is about 50min to Casablanca, 2 hours 40min to Fes, 4 hours to Tangier and just over 4 hours to Marrakesh.

The city is well served by bus, the bus station is from Kamra bus station (Gare routière Kamra) : Avenue Al Fadila (near Avenue Kifah). The CTM company is there as are many other low cost companies. If you are travelling with 'Supratours' the bus station is situated at Agdal train station (gare ONCF Agdal).

Where to Stay in Rabat

In the current location of the Kasbah of the Oudayas, the Almoravids had created a fort to fight against the Berghouata tribes. This fort was replaced in 1150 by a Ribat (fortress) under the reign of the Almohad dynasty and became the gathering point for fighters going to Andalusia.
The caliph of Morocco, Yaqub al-Mansur, moved the capital of his empire to Rabat and started the construction of the Hassan tower which was supposed to be the biggest mosque in the world. He also transformed the Phoenician site of Chellah into a necropolis.
The city acquired the title, 'Ribat al Fath' (The Fortress of victory), to commemorate the Almohad victories.
At the end of the Almohad Dynasty and especially after Yaqub al-Mansur death (1199), the city began to decline, the Hassan tower construction work were stopped and the power shifted to Fez.

In 1609 the city experienced a significant growth when 13000 Moriscos settled in the city after being expelled from Spain.
The first inhabitants were from the city of Hornachos in western Spain and settled in the Kasbah. One year later in 1610, 10000 Andalusian settled in the low city and built a new enclosure, known as the Andalusian Wall.
The republic of Salé also known as 'The republic of the Pirates of The Bouregreg' became a city state from 1627 to 1668. The new inhabitants wanted revenge for their expulsion from Spain and piracy became the main source of income of the city. The pirates made long-distance raids as far away as Cornwall in the UK, Baltimore in Ireland and even Iceland.

The first governor of the city was Ibrahim Vargas. In 1624 Jan Janszoon, a Dutch origin who converted to Islam, became President and Grand Admiral of the Republic.
In the medina you can still find a street 'Rue des Consuls' which in where Western embassies used to be.
The republic became weak after many bloody clashes between the inhabitants of the Kasbah from the town of Hornachos, the Andalusians inhabitants of the lower town and the inhabitants of Salé.

In 1668, the Republic became under the control of the Alaouite dynasty.
In 1912, France established a protectorate in Morocco and Rabat became the capital of the country.

Built in 1195 under the reign of the Sultan Yacub Al-Mansour of the Almohad Dynsasty, this mosque was supposed to be the largest one in the World. After the Sultan's death in 1199 the construction stopped. It was designed by Jabir ibn Aflah who designed two other famous mosques, Al Koutoubia Mosque in Marrakesh and the Giralda Mosque in Seville.
Due to the Lisbon earthquake in 1755, most of the 200 columns have fallen down. Next to the mosque you can visit a masterpiece of Moroccan architecture : the Mausoleum of Mohammed V. Built in 1971 it is a monument where King Mohammed V and his two sons the King Hassan II and the Prince Abdallah are buried.

This fortress was built in 1150 and was the base from where the Moroccan army conquered Andalusia.
In 1833 the tribe was expelled from Meknes by the Sultan Moulay Abderrahmane. They settled in the Kasbah which bore their name. There is a museum inside the Kasbah next to Andalusian gardens where you will find Moroccan handcrafts, traditional jewelery, ornaments, traditional clothing, weapons and astrolabes (Arabic astronomy instrument).
Oudaia Museum is open everyday (except Tuesday) 9AM to 4:30PM.

The Necropolis of Chellah

Chellah was a colony of different cultures: the Phoenicians, the Carthaginians and the Romans, You can actually see the ruins of the Roman town Sala Colonia. The excavations have revealed a forum, a large fountain, a triumphal arch and even a Christian basilica.
Chellah was abandoned for centuries until the Merinids chose the site upon which to build their necropolis. It is protected by a large enclosure which has three doors, the main door called Door of Sidi Yahia, the second door Bab Al-Bassatine 'Gate of the Gardens' and the last Bab Ain al-Janna the 'The Source of Paradise'.

The Medina (old town) was the place where the Moriscos (expelled Andalusian) settled in Rabat. They built a rampart (The Andalusian Rampart) inside the city as the Almohade enclosure was too big to defend effectively.
There are several gates to access the medina. The two main gates are Bab Al-Alou and Bab Al-Had on the west side of the Medina and on the south side there are two gates, Bab Bouiba and Bab Chellah.
The medina is full of life and history. Take a stroll around the historic centre, and admire the old houses and the traditional souks (market) where you can buy Moroccan crafts.
Not to be missed is the 'Rue des Consuls'. This street is a listed monument and the street take its name from being the place where the consulates were situated when Rabat and Sale formed the Republic of Bou Regreg. Today there is several leather shops, artisans working wood and metals for jewellery and not to mention the authentic rbati carpet.

The Marina is relatively new. It is located in Sale along the river Bou Regreg where you will find a good selection of restaurants and cafes, with a breathtaking view of the city.

Bab Rouah is the most famous gate in Rabat, meaning 'Gate of the Winds' in Arabic. It was built during the Almohads Dynasty and was the main gateway to the city. It is located at the end of Victory Avenue and the gate has now become a beautiful contemporary art gallery.

The new Rabat Zoo is located 8km from city center, it is the prefect place to spend a day with your family. You can see the Barbary Lion, also known as Atlas Lion, which is the world's largest subspecies of lions.
Rabat Zoo's opening times are 10 am to 4:30 p.m. (November to March) and 10 am to 6:30pm (April to October).

The Mohammed VI modern and contemporary art museum is one of the largest museum's in Morocco. It aims to collect and preserve national heritage. The museum is open daily from 10am to 6pm, closed on Tuesdays.
The museum is located at the corner of Avenue Moulah El Hassan and Avenue Allal Ben Abdellah.

This museum (called in French, 'Musée Archéologique') was opened in 1932. It's a major Moroccan archaeology museum covering pre-historic times and the pre-Islamic era. You will find an amazing collection of archaeological artefacts from the country including beautiful ceramics as well as artefacts from the Roman city of Volubilis.
Address : 23 Rue al-Brihi Parent, Opening hours 9am-4.30pm Wed-Mon

Mawazine Festival Rhythms Of The World

Mawazine is a music festival held annually in several different places within the city. The festival features many international stars from all around the world as well as local stars. 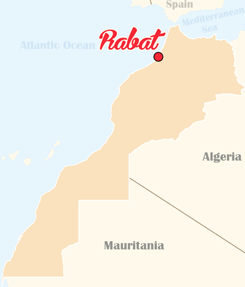