Marrakesh has an international airport with plenty of low cost carriers flying there.
You can take a white taxi but forget your hang-ups and start haggling to get a best deal. The airport is about 5km from the city, you can offer 50 Dhs to the taxi driver (the usual price is 70 Dhs to the airport and 100 Dhs the other way) if he refuses you can take a bus (N°19) departure every 30 minutes from 07:00 AM to 09:30 PM, the bus ticket price is 30 Dhs.
If you are not in a hurry and want to save money here is a tip:

Where to Stay in Marrakesh

Marrakesh was founded in 1062 under the reign of the Almoravid King Yusuf ibn Tashfin. Quickly many mosques and madrassas were built and the city became a major center for traffic between the western Maghreb and sub-Saharan Africa.
Many palaces were built using Andalusian craftsmen from Córdoba and Seville, who brought the Umayyad style characterized by carved and lobed arched domes.
In 1122 the city was fortified by walls by the son of Youssef Ibn Tachfine Ali Ben Youssef.
In 1147 the Almoravid lost the city against the Almohad and almost all the monuments and palaces were destroyed by the Almohads as they considered the Almoravid to be heretics. In 1184 they built the impressive Koutoubia Mosque on the ruins of an Almoravid Palace.

In the sixteenth century Marrakesh became the capital of the Saadian Empire and the city was embellished and restored during the reign of Ahmed Al-Mansur Ad Dhahbi ('the golden' in Arabic) who brought more than half a ton of gold from Timbuktu (Mali). This gold was partly used to build the sumptuous El Badi palace.

After the end of the Saadi Dynasty in 1659, the Alaouite dynasty took control over Morocco and Meknes became the new capital of the Empire.

Jemaa El-Fnaa square is located in the southwest of the medina. This popular and lively place has become one of the symbols of the city since it developed in the 11th century.
The place has been part of the UNESCO World Heritage site since 1985 and you will find variety of activities such as fortune-telling, Gnaoua dancers, storytellers, henna tattooing, water-carriers (called 'Grrab' in Moroccan) and of course many restaurants, fresh lemon and orange drinks. If you are brave enough try the snail soup, it's very good.

Near Jemaa El-Fnaa you will find many souks so don't hesitate to bargain. This is something very particular in the Moroccan culture, for example if the price is 200 Dhs start low and offer 100 Dhs if the merchant refuse you can either increase your bid or walk away. If the vendor really want to sell to you he will ask you to stay and will either accept your offer or give his final price.

The Mosque was built on the ruins of an Almoravid Palace by the Almohad dynasty in 1184 and finished in 1199. The tower of the mosque served as model for the Giralda tower in Seville (Spain) and for the Hassan Tower in Rabat.
The minaret is 77 metres height (69 without the spire) and the mosque is located 300 meters west of Jemaa El-Fnaa

This ruined palace was built by Ahmad Al Mansur Ad-Dhahbi in 1578 and took 25 year to build. It was the most beautiful palace in Morocco with only rare and expensive materials being used, such as marble from Italy, gold powder from West Africa, porphyry from India and also Jade stone from China.
In 1695 the Sultan Moulay Ismail ordered the transfer of the most valuable materials from El Badi Palace to Meknes.

This palace was built in 1866 by 'Si Moussa' the chamberlain's of Sultan Hassan 1st. The chamberlain son Ahmed ben Moussa extended the palace during his reign as regent, he lived with 4 wives and 24 concubines of his harem. The name of the palace is named after one of his favorite mistress; Bahia.

The qubba meaning 'dome' is a religious building built in 1117 by Ali Ben Youssef. This is the last vestige of the Almoravid dynasty, the others buildings having been destroyed by the Almohad dynasty.
The dome is located just opposite the entrance to the Ben Youssef Mosque and a few meters from the Marrakesh museum.

These tombs date from the time of the Sultan Ahmad Al-Mansour Ad-Dhahbi (Reign 1578-1603) of the Saadi dynasty. The tombs where rediscovered in 1917 by the French. About sixty Saadians are buried there, including Al-Mansour, his successors and his family. The building was lavishly decorated with finely worked cedar wood, floral motifs, calligraphy and marble from Italy.
Outside, are the graves of soldiers and servants, and the garden of the necropolis.

The Madrasa was built by the Saadien Sultan Abdallah al-Ghalib in 1564 and the school took its name from the Almoravid Sultan Ali Ben Youssef. Though he had died 100 years earlier. The Madersa had capacity for over 900 students and students who weren't from Marrakesh could board there. It is the largest Madrasa in all of Morocco.
Ticket prices : 20 dhs (2$)

It's the perfect place if you are looking for something different. The Palmeraie is a quiet area full of palms where you can experience some authentic activities like camel rides (cost 100 Dhs - 11$) or even quad bikes!. Do not hesitate to haggle over the price.

These beautiful gardens were built in 1929 by the French artist Jacques Majorelle a few years after he moved to Marrakesh. He also built a large workshop inside his villa there.
He created a botanical garden based on the Islamic gardens, the garden quickly became full of different varieties, becoming a refuge for hundreds of birds.

In 1937 he painted the walls of his villa with a unique blue colour, inspired by Moroccan blue tiles, and called the color 'Majorelle Blue'.
In 1980, Yves Saint Laurent bought the house and made significant renovations.
At the gardens there is a Berber Museum, displaying a small collection of Irke pottery, artefacts, clothing and jewellery.
Over the years this beautiful villa has become one of the best attractions in Marrakesh, a haven of peace which is tended to daily by 20 gardeners.

Menara Gardens are botanical gardens about a 45 minute walk away from Jemaa El Fna square. This peaceful place was planted with olive trees during the Almohad dynasty.
The artificial basin allows the irrigation of the surrounding gardens and orchard, and it is supplied with water by a 700 year old hydraulic system with water coming from the mountains located about 40 km south of the city.

This museum, located near Ben Youssef mosque, was a palace built in the 19th century. The palace was restored by Omar Benjelloun, a Moroccan businessman and art collector.
You can find contemporary art exhibitions there and also Moroccan collectible copper, metalware, jewellry, coins, pottery and traditional Moroccan clothing.

This is a little museum located to the north of the Bahia Palace, it's more of a palace than a museum but you will find beautiful architecture and a collection of carpet, jewellry from all of Morocco plus Moroccan pottery and other artefacts.

Every year the festival runs for a week during the month of July. This music festival brings together a variety of local and foreign artists.
The festival takes place in various locations in Marrakesh such as Djemaa el Fna, El Badi palace, Dar El Bacha, the Royal Theatre and the Menara gardens. 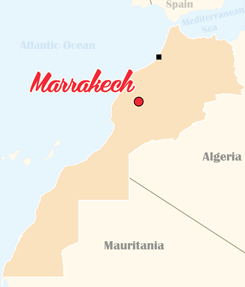