The nearest airport is in Fes, around 64 kms away.

The CTM bus station is near Meknes train station. Choose to travel with CTM instead of the older but cheaper buses you can find in the main bus station (west of the medina).

Meknes is connected via the A2 highway, to Fes, Rabat, Casablanca and Marrakesh.

Where to Stay in Meknes

The city was founded in the 9th century by the Meknassa tribe who had fled Kairouan in Tunisia. The Almohades destroyed the city to build a larger and more imposing city, between 1199 and 1213.
After the Almohads the Merinids built some Madrassas like Bou Anania in 1331 as well as also some mosques and Kasbah.
The Alawite Sultan Moulay Ismail began the construction of a great palaces, gardens, monumental gates and over 40 kilometers of walls 15 meters height.
He used at least 25,000 European slaves for the construction, kidnapped from European villages by Moroccan pirates. In 1696 the Sultan ordered the demolition of the El Badia Palace in Marrakesh to reuse materials in Meknes. The sultan chose Meknes as capital of his empire in 1672.

This medina is smaller than the one in Fes but it is cleaner and will charm you with its authentic atmosphere, many shops and great choice of restaurants.

This amazing gate was completed 5 years after Moulay Ismail's death, during the reign of his son Moulay Abdellah in 1732. This is the main entrance of the Imperial Palace built for Moulay Ismail. The gate was named after the architect, El-Mansour, a Christian renegade who converted to Islam.
The marble columns that decorate the side bastions were taken from the Roman ruins of Volubilis.

The Agdal basin is located 500m south of the Mechouar and the Royal Palace Mhensha. It is a large water storage tank located inside the Kasbah. It was built under the reign of Sultan Moulay Ismail in the early eighteenth century to serve as a strategic reserve of water and to irrigate the gardens and orchards in the city.
The basin has a trapezoidal plan and measures 319m long and 149m wide, with a depth that varies between 2m and 3.5m.

Located some 500 meters south of the Royal Palace this monument dates back to Moulay Ismail in the early eighteenth century.
This is one of the prestigious historic monuments in Meknes. It groups a series of relatively cramped rooms around a spacious central hall of 26m long, 10m wide and 9m high. It was a place for food storage. It contains 10 rooms with ten well waterwheels. Water from these wells was used both for the building and for the basin.
Hri Souani was also the place where grain and hay were stored to feed Moulay Ismail's 12,000 horses.

The mosque was built in 1703 by the Sultan Ahmed Eddahbi and became the mausoleum where Sultan Moulay Ismail (1645-1727) was buried along with one of his wives and two of his sons. This is one of the few religious buildings in Morocco open to non-Muslims.
The burial chamber is richly decorated and you can see the four Comtois clocks which were a gift from the King of France, Louis XIV, to the Sultan. Louis XIV wanted to be forgiven after refusing to give his daughters in marriage to Moulay Ismail.

The madrassa was builded by Abu'l-Hassan and completed by his son and successor Abou Inan in 1345. It is an elegant rectangular building. The prayer room borders the courtyard to the east. The front door is adorned with a splendid decoration with zelliges and carved plaster.
The mihrab (which indicates the direction of Mecca for prayers), whose ornamentation is still preserved is remarkable for the epigraphic decoration. The pillars are decorated with zelliges, inscriptions and enriched with plaster panels.

Originally Bab el Khmis was the western part of 'Madinat al-Riad al Anbari' (City of the Amber garden), a sumptuous city built under the reign of Moulay Ismail in favor of his Oudatas army and for important people. His successor Moulay Abdellah destroyed this part of the building in 1731.

The gate is in the extreme north of the ancient city and stands on top of a hill. Its exterior is in the same style as the monumental gates of Meknes. Its decorated part is very similar to that of Bab Khemis.

Qara was a Portuguese architect and prisoner and this ancient prison is located inside the Ismaili Qasba, near the Ambassador's lodge. The monument was built in the early eighteenth century. It is a vast underground area consisting of three rooms composed of a series of arches resting on pillars with an average size of 140cm by 3 m 46cm, and supporting barrel vault loaders.

Built during the time of Sultan Moulay El Hassan I in 1882, it was the residence of his Vizier, Abou Abdellah El Jamaï. This building was converted into a museum in 1958. Originally it included a bath, a slaughterhouse, shops and a fondouk (place or store of goods, animal housing and a place to accommodate merchants and travelers).
Currently, there is only the noble part and annexed housing remaining. The building is characterized by an Andalusian type garden (Riad) with pathways of zellige, fruit trees and flowers.

The Mauritanian capital, founded in the 3rd century B.C., became a Roman city and quickly grew, exceeding an area of 40 hectares. The historical site is located 40 minutes by car, 31km north of Meknes.

Just 4km from Volubilis, Moulay Driss Zerhoun is a small town over two hills at the base of Mount Zerhoun. In 789, it was here that Moulah Idriss I arrived, bringing with him the religion of Islam. He is also buried in the town. 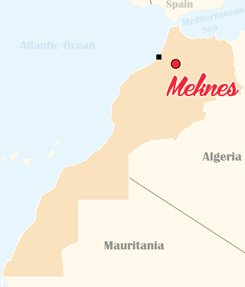