From the Amazigh Dynasty going back more than a thousand years, up to its restoration as sovereign nation from the French protectorate, Morocco is an exotic country filled with culture and tradition, and music is at the heart of this nation's cultural heritage.

Music is fundamental in the Moroccan daily life. It brings rhythm to almost all events, happy or unhappy, since the dawn of times. Many musical styles coexist, played on a relatively limited number of instruments.

Include the rebab, a bowed string instrument, that looks like a little primitive violin from which the medieval European rebec is derived; the violin, borrowed from the West, is played while resting on the thigh, almost like the viola de gamba; the nay, flute made of reed; the lute, called the “ud” in Arabic; the tambourine and the derbouka, made of skin stretched on a pottery, that we hold under the arm...

A Moroccan folk shawm or oboe played at weddings and other ceremonies, also used for recreational music for dancing.

A double-flute with two similarly-pitched sides and notched reeds for mouthpieces.

A pair of two-sided hand cymbals, clapped together to make interlocking rhythm patterns.

A double drum made from ceramic bowls covered with goatskin. One side is larger than the other, resulting in two different pitches.

A circular instrument with goatskin on one side and strings running along the back of the drum head, mostly used in traditional Moroccan weddings.

A small ceramic hourglass-shaped drum with snares on the inside, sometimes played with one hand snapping a finger onto the drum head for a popping sound.

This instrument looks like tarija but it is bigger, it is also used in the Middle East, it is placed under the arm or resting on the player's leg.

A small frame drum with jingles attached to the rim–like a tambourine.

This beautiful music instrument is a cousin of the lute, it is mostly used in Moroccan Andalusian Music.

Listen to this awesome music :

Amongst the popular instruments, we can find: the sintir, long lute with two or three strings that sounds a bit muffled; the ghayta, some kind of oboe played by the snake charmers on the Jamâa El-Fna square in Marrakesh; the tebilats, little twin drums made of terracotta or earthenware, covered by skin, and sold everywhere in the souk; the taarija, a small version of the derbouka, used a lot on the day of Ashoura, the children's festival; the bendir, a large tambourine with a wooden frame on which a goat skin stretches, is the favorite instrument of the Berber Awash...

On to the music itself, four genres can be distinguished:

The Andalusian music, skillful, is played in unison. Its melody features remind people of the music at the time of medieval Christendom (Gregorian chants). It has been introduced in Morocco during the 12th century, when the Muslims were chased away from Granada and settled in Tétouan, that became the home of Andalusian music in Morocco. This music style brings together singers and instrumentalists. The orchestra is composed of a rebab, a tar (tambourine), a derbouka and a laud which is a kind of four-string mandolin. The singers sing poems in classical Arabic or in Andalusian. Nowadays, this classical music, particularly popular amongst intellectuals, is still very present in the conservative societies of big cities.

Popular music is much more common. It is frequently accompanied, though a skillful rhythmic counterpoint, by the singers' hand clapping as well as the audience's, to whom these Arab melodies are addressed. The melodies are lighter and the lyrics are inspired from old tales or forgotten legends told by the hayada, singer of rural festivals. The songs, which are extremely long, are also played in unison, most of the time in “griha”, which means that they are improvised. In Marrakech, popular music takes the form of the “aïta”, which means “the call”: the improvisation is made from the strident shouts of the singers and the repetitive sound of the tambourines. Another popular music instance is the “n'fir”, used during parades or religious feasts. The n'fir sounds like parade music and military marching.

Berber music consists of highly repetitive chants that are partially improvised. It is inseparable from the dance and is conceived as a true show. Each tribe possesses its own customs and its own style which are expressed mainly during the big collective feasts of Ahidou and Ahouache. The dancers, accompanying themselves with a bendir, are also the singers and the musicians.

Raï, the last embodiment of the popular music, of Algerian origin, and which combines Arab-African rhythms and a mix of traditional and modern instruments (electric guitars, synthesizer), is becoming more and more successful in Morocco. In France, one of the most famous performer is the singer Khaled, who was in Marrakesh in 1997, since he couldn't get closer to his roots in Algeria.

Paul Bowles is an American traveler, a composer and a writer. He spent most of his life in Morocco and is known for his recording of Moroccan music, if you're interested in Moroccan Music you can enjoy this fantastic recording made in 1959. 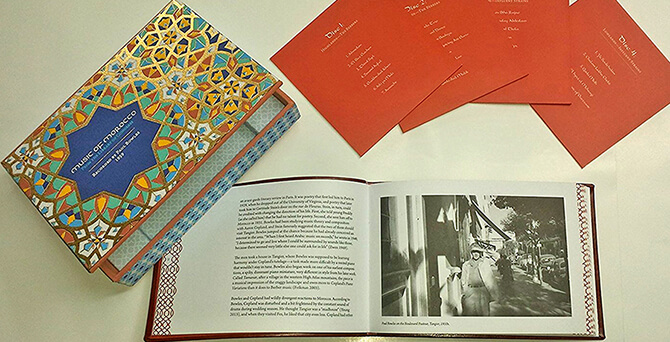